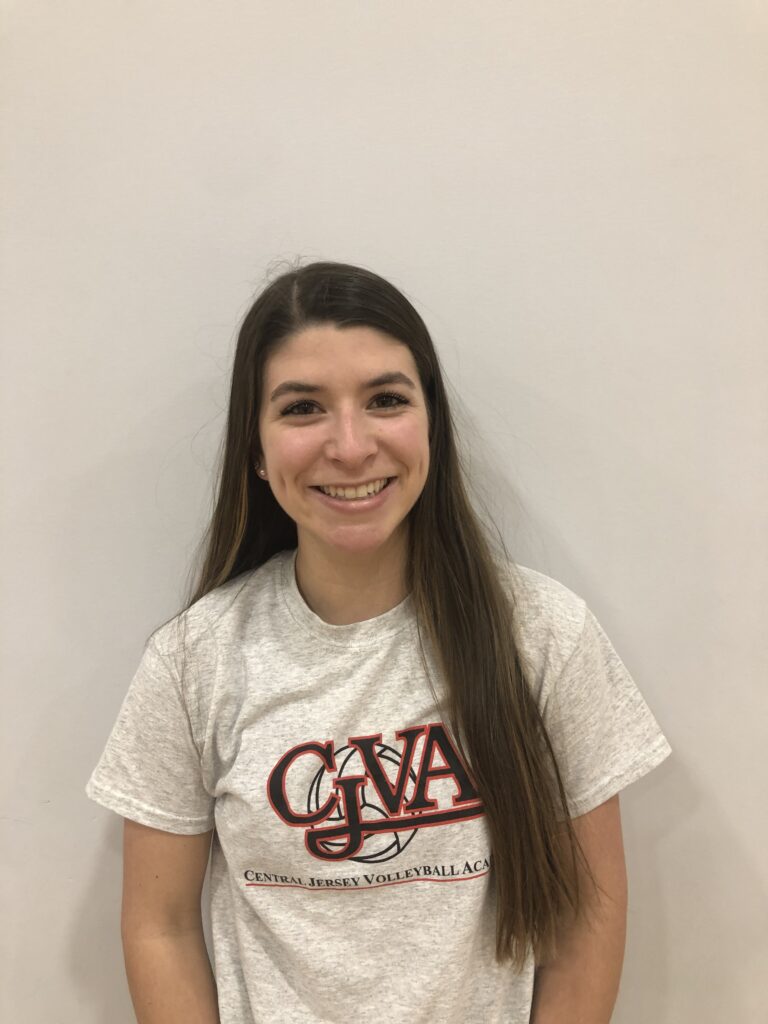 I started playing volleyball at early clinics that CJVA would run through the Somerville YMCA in 2008. I would attend all types of camps, clinics, jumpstart/spikers etc. until I played on my first team, 13 black, in 2009. From then on, I played for CJVA until I left for college in 2015. I attended Ursinus College in Collegeville, Pennsylvania for four years and was the starting Libero for all four years. While playing, I was named captain my senior year and was part of the Student Athletic Advisory Committee. During my four years, I was consistently ranked in the top ten for service aces in my conference- coming in at number one during my junior year. While at Ursinus, I majored in media and communications with a concentration in creative writing. Upon graduating, I took a short break before going back to school to pursue my masters in sports administration.

As far as coaching goes, I have clocked the majority of my hours at CJVA. I began as a C.I.T at CJVA during my sophomore year of high school where I was mostly involved with camps, clinics, and jumpstart/spikers. My senior year of high school I coached the 12 red, girls’ team. Additionally, I have coached beach volleyball for both ECBVA and CJVA for 3 non-consecutive seasons. I took a break from coaching until my senior year of college where I coached a 15 1’s team at Club Integrity alongside my college coach. Once I graduated, I moved back to Hillsborough where I began coaching at Hillsborough High School as the girls’ freshman coach and boys’ JV coach. During this time, I also came back to CJVA to coach a boys 15 Red team and a girls 16 black team.

I like to say that I coach with intention. I think that giving reasons behind corrections/advice/etc. gives the player a better grasp of the game rather than teaching them blind memorization. Therefore, the next time a player gets into the same situation, they are more equipped to fix the problem themselves knowing the reasoning behind it. I think that teaching intention makes it less likely for a player to go through the motions and more likely to learn the ins and outs of a game. If we think about why we chose to tip to a certain spot then we are consciously recognizing the defense on the other side.

Attitude for sure. Regardless of their skill or experience, a positive attitude and general openness to be a part of the game goes a long way with myself as well as the other players. Energy and attitude are incredibly infectious in volleyball, so I will always take a kid who positively influences the mindsets of those around them.

I’m a big believer in the idea that everyone you meet has an impact on your life- whether positive or negative. Therefore, I can honestly say that each coach I have encountered has made me the volleyball player and coach that I am today. However, the coaches that I surrounded myself with for the majority of my life like *cough cough* Andrea Salazar has made a large impact on the way that I cultivate my team culture and learning atmosphere. She showed me how to create a true team connection through hard work, hustle, and mutual respect without losing the passion of the game. My college coach also had a big influence on the idea that being an athlete doesn’t stop when you leave the gym. Everything that an athlete does will affect their performance and their mindset.

Honestly, when I’m not coaching volleyball I like to be playing volleyball. However, I do love to read and am almost always hanging out with my family- both by blood and by choice.

My favorite thing about volleyball is the fact that it is one of the most dependent team sports out there. Volleyball physically cannot be played by one individual and teams cannot be successful if each player plays as an individual. Everything from physical skill to mental skill can only be considered successful if the whole team is on the same page.